Not happy with the PVC flyline technology of the day, Paul Burgess, a mad keen flyfisher, who also happened to be a qualified engineer, set about changing the process by which modern flylines are manufactured. Moving away from the traditional tower system, Paul began extruding fly lines with computer controlled systems that allowed for control over production accuracy previously thought impossible.

That was the late 80's, now over 20 years later, Airflo are the worlds leading manufacturer of solvent free flylines and responsible for developing a series of innovations unparalleled by any other line manufacturer during that period. Whilst we may not have invented the flyline, innovation has been a keystone at every stage in our development, being the originators of Polyurethane coatings, creating the first welded loops, developing low stretch cores and even the worlds first density compensated flylines.

More recently, we've developed an advanced range of flylines with Ridged coatings that reduce surface friction and improve shootability - each breakthrough offering a truly tangible improvement, not some invisible technology developed in the minds of the marketers.

'Green' or 'Environmentally Friendly' is something all fishing companies like to claim, and whilst we are more than happy to make you aware that our coatings are kinder to the environment, it was originally the search for a polymer that didn't leach solvents, was unaffected by UV and ultimately just lasted longer that lead us to pursue Polyurethane as an alternative to solvent based PVC.

The final result is what we believe to be the worlds most advanced range of flylines and judging by the bandwagon we've created with our continuous stream of innovation, most of our competitors would seem to agree.

Airflo is part of the BVG Airflo Group. With a £45m turnover and shipping over 1 million orders a year BVG Airflo is the UK's largest independent operator of specialist mail order catalogues. These catalogues include two fishing tackle businesses. Fishtec and Total Fishing Gear. 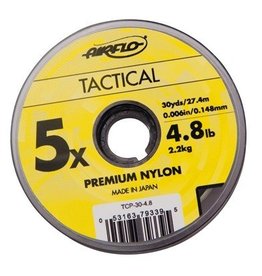 Our tactical tippet is our go-to material for all day to day Techniques.
Add to cart
Airflo Tactical Tippet Material (30 YARD)
$4.99 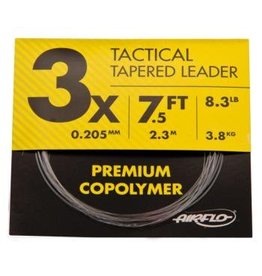 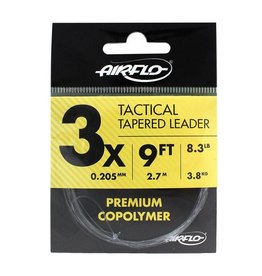